Who's Slamming Who Who's Sl...

Let this podcaster know that you like their show and want another episode:

Embed this Podcast
click here
Favorite Links
Subscribe to this Podcast
Entertainment For The Boys!
January 20th, 2011: In The Room with Brady Hicks and Special Guest KIZARNY
January 20, 2011 05:32 AM PST 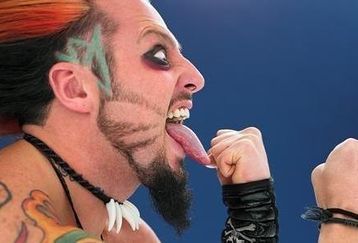 Due to technical issues beyond Brady Hicks' control, this week's IN THE ROOM podcast came up as a corrupt file. In its place will be a special "Retro" edition of the show in which Sinn Bodhi (formerly WWE's Kizarny) stops by for a visit, from March 2010. If you were ever curious about The Undertaker backstage, karaoke with Sweet Daddy Siki, genetics involving Jake The Snake and Doink, or Christian's love life, then this is the show for you. The guys also took some time to further speculate on WrestleMania XXVI, as WWE's promotion for the event entered its home stretch.